Assigned To
Authored By
Tags
Subscribers

The origin layer is the index in swh.provenance allowing to answer the question "in which origin can the revision R be found?" and eventually "what is the most probable origin O in which the revision R has been created?"

The current implementation of the origin layer is pretty basic and simple, but it performs poorly, both in terms of ingestion bandwidth and storage usage.

It consists in 2 tables:

The table RiO stores the head revisions found in a origin, ie. the revisions that have been identified as a branch in a snapshot of a visit of the given origin. 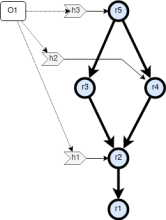 with only one visit producing a single snapshot with h1, h2 and h3 heads (branch/tags) would end up filling the tables described above like:

for the RiO table :

and for the RbR table

This data model lacks storage efficiency (some informations on the topological structure of the git history are duplicated) and ingestion efficiency (each head is ingested one at a time, thus the whole git history is recomputed for each head).

We can make the required storage a bit more efficient and improve the efficiency of the ingestion algorithm using the following data model.

Using such a model, the example above would become:

This task has been migrated to GitLab.